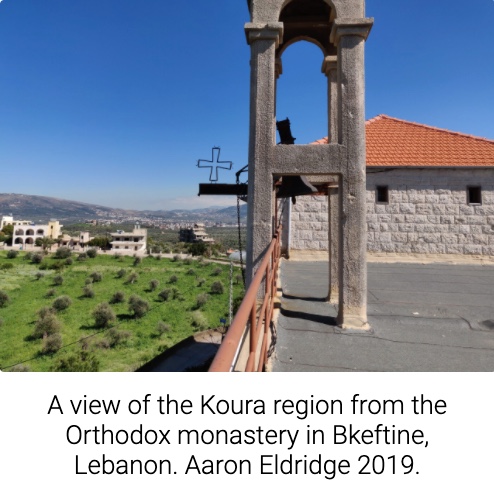 As part of our series spotlighting UC Berkeley graduate student research, BCSR recently had the opportunity to sit down with Aaron Eldridge, a PhD student in Anthropology. Aaron Eldridge is an anthropologist specializing in contemporary asceticism in the Levant. His interdisciplinary research interests include Muslim-Christian entanglements in the Eastern Mediterranean, postcolonial political theologies, historical consciousness, as well as theories of destruction and form of life. His work has appeared in Exchange (2020) and Qui Parle (forthcoming).

BCSR: Could you tell us a little about yourself?

Eldridge: I grew up in rural Alberta, which is a prairie province in Canada. I did my BA at the University of Alberta where I studied sociocultural anthropology as an undergraduate. I had an inkling of history and archaeology at first, but social anthropology and philosophy, along with the study of Arabic, took me along a different path, which I pursued at the U of A and later when I went to England for a master’s degree in Social Anthropology at the University of Oxford.

BCSR: Can you tell us a little bit about your dissertation and what you might see as the significance of your research?

Eldridge: My dissertation considers the entanglements of religious practice and theology with destruction by taking the reinhabitation of long-abandoned Orthodox Christian monastic sites in post-Civil War Lebanon (after 1990) as a site of inquiry. I spent nearly two years doing ethnographic and archival research in Lebanon, detailing how these monasteries are reinhabited and how they have become increasingly popular. These new communities attract young people, coming into adulthood, from the post-Civil War generation. They haven’t lived through the Civil War, and yet they have a memory of the Civil War through their parents and through the iterations of post-Civil War conflicts and immiseration that continue in Lebanon. My research situates this question of precarity and crisis within the context of people taking up ascetic practices of prayer—doing the craft of ascetic life—and founding new ascetic communities. I trace how chant traditions, linguistic practices of translation, and poetry proliferate in these monastic spaces, and argue that these kinds of practices have a therapeutic quality to them. Orthodox ascetics will often talk about their theology as a kind of therapy, and they like to think of their practiced theology more in medical or psychological terms than they do in metaphysical terms. In sum, my research asks how it is that these communities can, perhaps counterintuitively, thrive in a destructive landscape. 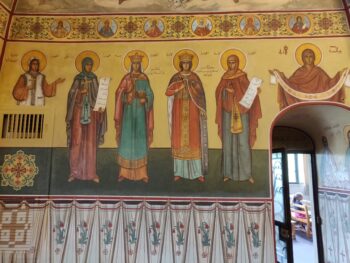 A view of the Koura region from the Orthodox monastery in Bkeftine, Lebanon. Aaron Eldridge 2019.

BCSR: Are these generally all young people who are choosing this life?

Eldridge: There is an older generation of elders. But yes, this is a younger generation who, even if they don’t actually become monastics themselves, inhabit the monasteries in their off time. When they get off work in the evenings, or on weekends, they will go to the monastery, so more and more of these monasteries have become major centers of communal life in the country. Thinking about the ways that these new communities are able to endure the precarity and social or economic collapse that defines much of life in Lebanon today is what is intriguing about them.

BCSR: What do you see as the significant elements to your research?

Eldridge: My research has three major interventions, which map onto the three overarching sections of my dissertation. The first one points to the inadequacies of the conceptual notion of crisis, especially in scholarly treatment of the Mashriq. I take inspiration from Reinhart Koselleck in order to think about the horizons of expectation and spaces of experience that constitute the temporality of communal life. Thinking about those spaces and horizons at the monastery means thinking differently about what it means for life to be precarious or impinged upon. I make an argument in the dissertation that the language of crisis lends itself rather readily to the concept of national (or sectarian) affiliation—the current state of a national polity, the state of a national economy, and the sense of national belonging. The monastery produces different sets of affiliations, different horizons, different spaces of experience, and a different meaning to the word endure. Crisis means something very different in the space of a monastery. There, life in the world is a trial of the soul.

The second theme is about poetics, that is, inheritance as a creative transmission, and I draw a lot on Critical Theory and religious studies for that. I think about how the practice of hesychasm (which means “stillness” or “silence” in Greek) theologically articulates a distinction between passional attachments that constitute “the world” and an inner and active stillness, where an encounter with God might take place. I examine how ascetic poesis (chanting, translation, prayer) are processes deeply informed by this anthropology of the body, in which one learns to embody ascetic practices as the movement between individual and communal voices, eremitic and coenobitic life. I also write in this section about the postcolonial condition of language in the Mashriq and argue that the ascetic attunement to that condition is one that seeks an encounter with the divine in the ruins of language.

The third part, which is currently being written, thinks about the different scales of “the other” within monastic settings in Lebanon: the neighbor, finitude, and the divine. I hope to think about the imbrication of Islamic practices—mostly those of bodily prayer and vocalization, but also of language about God—with what one sees in Arabic-speaking Orthodox Christianity in particular and in Eastern Christianity in the Middle East more broadly. In that sense, I hope to give a rigorous account of those imbrications without making recourse to the secular notion that these religious traditions are hermetic and strictly sectarian entities that are insulated from the outside. 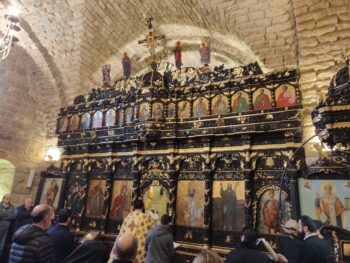 An infant being ‘churched’ during the Divine Liturgy at the monastery of Mar Elias, Shwayya, Lebanon. Aaron Eldridge 2019.

BCSR: What influence has Critical Theory had on your work?

Eldridge: My interest in Critical Theory likely has roots in my youth; there’s definitely something of “counterculture” in my own upbringing. My grandmother was a “back-to-the-lander.” She and my father lived for some time without running water or electricity while my grandmother documented all of her experiences in a province-wide newspaper in Alberta. So, there’s a bit of petitionary retreat against capitalist forms of living which has had a lasting imprint on me. I think Critical Theory speaks to this idea of petition or protest, and Critical Theory’s unsettledness is an immensely powerful way of interrogating important questions (not just for the academy but for life). My entry into Critical Theory initially took place through the anthropological writings of Talal Asad, who engages Critical Theory from an interesting set of concerns (the religion/secular divide, the body’s capacity, authority, time) which were based in anthropological practice and its methodology. The kinds of questions that informed his concerted effort to interrogate secularity remain a catalyst for my research. Asad’s work was carried on by my late adviser, Saba Mahmood, and my current adviser, Charles Hirschkind, who both worked with Asad; their ethnographic work (in Egypt and in Spain) is very much indebted to Asad’s complex concept of tradition and to the questions of authority, embodiment, and politics that it poses. I find these formulations and debates immensely fecund. There is a recurring sense that these questions are not settled; the questions around political theology or poetics, embodiment, or the division between secular and religious forms. What is that kind of division? How does it proliferate in ways largely unnoticed?

The Critical Theory Program at Berkeley has been fostering and formative for me; fascinating discussions abound. In reading Koselleck or Heidegger or Giorgio Agamben (all of whom I fondly remember first reading with Samera Esmeir), I developed ways of tackling questions that had been in anthropology from its beginnings, but from angles that were not always very apparent. The approach was different, and I found that very helpful.

BCSR: The word “interdisciplinary” comes to mind when you say “from angles that were not very apparent.”

Eldridge: I like to read across disciplines, and I find that to be a very helpful way of thinking about problems. It seems to me that a lot is lost when one doesn’t realize that Lebanese ascetics, Agamben, and Judith Butler are all addressing similar kinds of problems. Despite the fact that they might have different grammars (to use Wittgenstein’s philosophical term), you can do something with what they’re saying synthetically; there’s something compelling in putting their concerns onto the same field of inquiry. That is what Saba did in her first book, The Politics of Piety. She was, in part, bringing Judith Butler’s concerns and theories vis-à-vis subjectivity and gender into a common field, wherein the questions and debates around feminism articulated by Muslim women in Cairo could be heard as well. A lot of what I do around Critical Theory is in remembrance of fostering that kind of encounter.

BCSR: How would you answer that question in the context of the New Directions in Public Theology experience?

Eldridge: I found it exhilarating to work across a discipline that has a rather fraught genealogy in and of itself. In the setting of New Directions, the Berkeley Center for the Study of Religion was trying to defer normative, or at least inherited, ways of thinking about religious difference and to foster alternative coordinates, equally rigorous, for encountering its questions. One of the ways we did that was to talk about method. Since we weren’t just talking about different religious traditions empirically and because we came from different disciplines, we had striking conversations. The differences between the English student and the anthropology student, say, helped to flesh out how different disciplines have their own commitments, and how they are differently shaped by, and inherit, this object called “religion.” David Marno, working in conjunction with another teacher of mine, Stefania Pandolfo, brought a lot of insight by working through the question of religion/secularity as it is refracted through text analysis protocols versus ethnography. What was fostered there, in short, was a shared intent to develop new ways of thinking about religious practice or religious thought. But that only came into view in that cross-disciplinary, cross-religious space; I don’t think you’d get the same thing if you just had a bunch of anthropologists of Islam or a bunch of anthropologists of Christianity in the same room. I do think that it was something unique that was fostered in that particular bricolage.

BCSR: Yes, it would be wonderful to have more of an opportunity to have those sorts of experiences and discussions across disciplines. Can you tell us about your future research and career plans?

Eldridge: Most of my time is dedicated to writing my dissertation at the moment, but I am also looking forward to the possibility of postdoctoral research. In terms of ongoing research, one of the things that I found in my archival work in Lebanon was a volume that I felt very compelled to translate—it was written in 1990 by a Syrian-born Lebanese monk named Aspiro Jabbur. The title in English would be “Confession and Psychoanalysis.” It’s an interrogation of monastic practices of the practice of confession (both Christian and psychoanalytic). Jabbur plays on the idea that psychoanalysis could also be rendered as an “analysis of the soul.” It is exemplary of the sorts of encounters that I find very interesting: psychoanalysis and Orthodox Christian asceticism are brought together to understand something about the vicissitudes of Lebanese history, and then thinking about that historical time from the vantage of the soul. The English-language version of the text will be published with Fordham in their Christian Arabic Text in Translation series.

Eldridge: My wife and I have a child on the way in less than two months, so we’re bracing for radical changes!