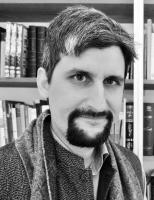 On the History of Religions and the Study of Islam

Islam plays a powerful role in American public discourse. Across this often contentious landscape, numerous voices can be heard defining and contesting the nature of Islam. These definitional problems also shape academic debates, where the seemingly basic question of what is Islam has received renewed attention. This lecture addresses the place and history of Islam in the modern academic study of religion in light of discursive structures that are designed to contain and delimit the meaning of Islam.

His research has examined the role of translation in the formative stages of Islamic history, particularly in the areas of geographical writings on the wonders of the world and scriptural hermeneutics concerning the transcendental nature of the Qur’an. His first monograph, Mapping Frontiers across Medieval Islam: Geography, Translation and the ‘Abbasid Empire (I.B. Tauris, 2011), explores the diverse uses of translation, scriptural exegesis, and administrative geography in the projection of imperial power. His second book, The Vernacular Qur’an: Translation and the Rise of Persian Exegesis (Oxford University Press, Qur’anic Studies Series – Institute of Ismaili Studies, 2012), examines early juridical and theological debates on the translatability of the Qur’an, the rise of vernacular cultures, the development of Persian exegetical literature, and translations of the Qur’an.
Zadeh is currently researching several topics, including astonishment and wonder before and after the age of reform, material and visual cultures in Islamic studies, knowledge networks spanning frontiers across Central and South Asia, and the intersections between sacred geography, history, and scripture. He is particularly interested in the problem of the marvelous, broadly construed, over the course of Islamic history. This topic forms the basis for his book project, Marvelous Geographies: Religion and Science in Islamic Thought (under contract with Harvard University Press). He is also undertaking a book project on the early history, formation, and memory of Mecca, with specific attention to the repeated destruction of the sanctuary complex at the end of the seventh century and the ensuing implications for ritual practice and political authority. Both books draw on archival research conducted with the support of an Andrew Mellon New Directions Fellowship (2013–16).
Co-sponsored by the Department of Near Eastern Studies and the Center for Middle Eastern Studies of UC Berkeley, and the Center for Islamic Studies of the Graduate Theological Union.
The Berkeley Public Theology Program invites innovative thinkers and public figures to Berkeley to reflect on the past, present, and future of theological inquiry. Such lectures spark scholarly conversations on campus and place Berkeley at the center of global conversations on religion and public life.