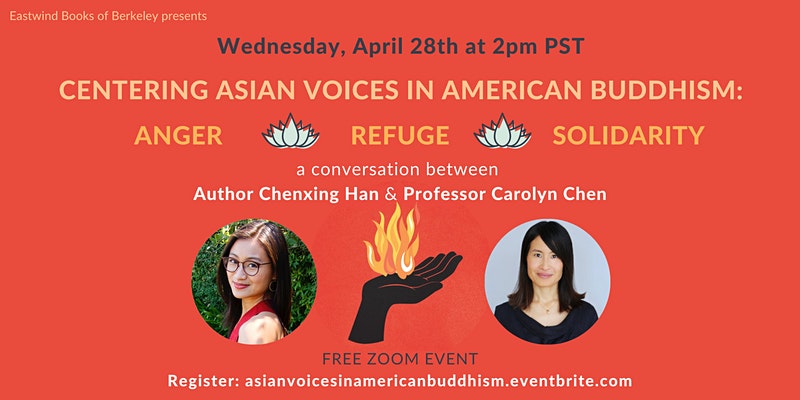 Join Eastwind Books for a conversation between Chenxing Han and Professor Carolyn Chen on Be the Refuge.

To purchase copies of the book, visit www.asiabookcenter.com

Chenxing Han is a Bay Area–based writer whose publications have appeared in Buddhadharma, Journal of Global Buddhism, Lion’s Roar, Pacific World, Tricycle, and elsewhere. She holds a BA from Stanford University and an MA in Buddhist studies from the Graduate Theological Union. After studying chaplaincy at the Institute of Buddhist Studies in Berkeley, California she worked in spiritual care at a nearby community hospital in Oakland. Her first book, Be the Refuge: Raising the Voices of Asian American Buddhists, was published by North Atlantic Books in January 2021. www.chenxinghan.com

Carolyn Chen is Associate Professor of Ethnic Studies at UC Berkeley and faculty affiliate of the Berkeley Center for the Study of Religion. She is author of Getting Saved in America: Taiwanese Immigration and Religious Experience (Princeton 2008) and co-editor of Sustaining Faith Traditions: Race, Ethnicity, and Religion among the Latino and Asian American Second Generation (NYU 2012). Her forthcoming book with Princeton University Press, Work Pray Code: When Work Replaces Religion in Silicon Valley, is about Asian spiritual practices in Silicon Valley tech companies.

Eastwind Books Multicultural Services (EBMS) is a 501(3)c non-profit dedicated to the promotion and accessibility of Asian American and Ethnic Multicultural Literature. EBMS is the community education arm of Eastwind Books of Berkeley which is comprised of a dedicated staff of booksellers, artists, poets, and community workers. Our events are for educational purposes and we appreciate your tax-deductible donations and continued support.

The recording of this event can be found on the Eastwind Books of Berkeley’s YouTube channel.

Co-sponsored by Eastwind Books and the following units at UC Berkeley: Program in Asian American and Asian Diaspora Studies, Asian American Research Center, Berkeley Center for the Study of Religion, and the Center for Buddhist Studies.