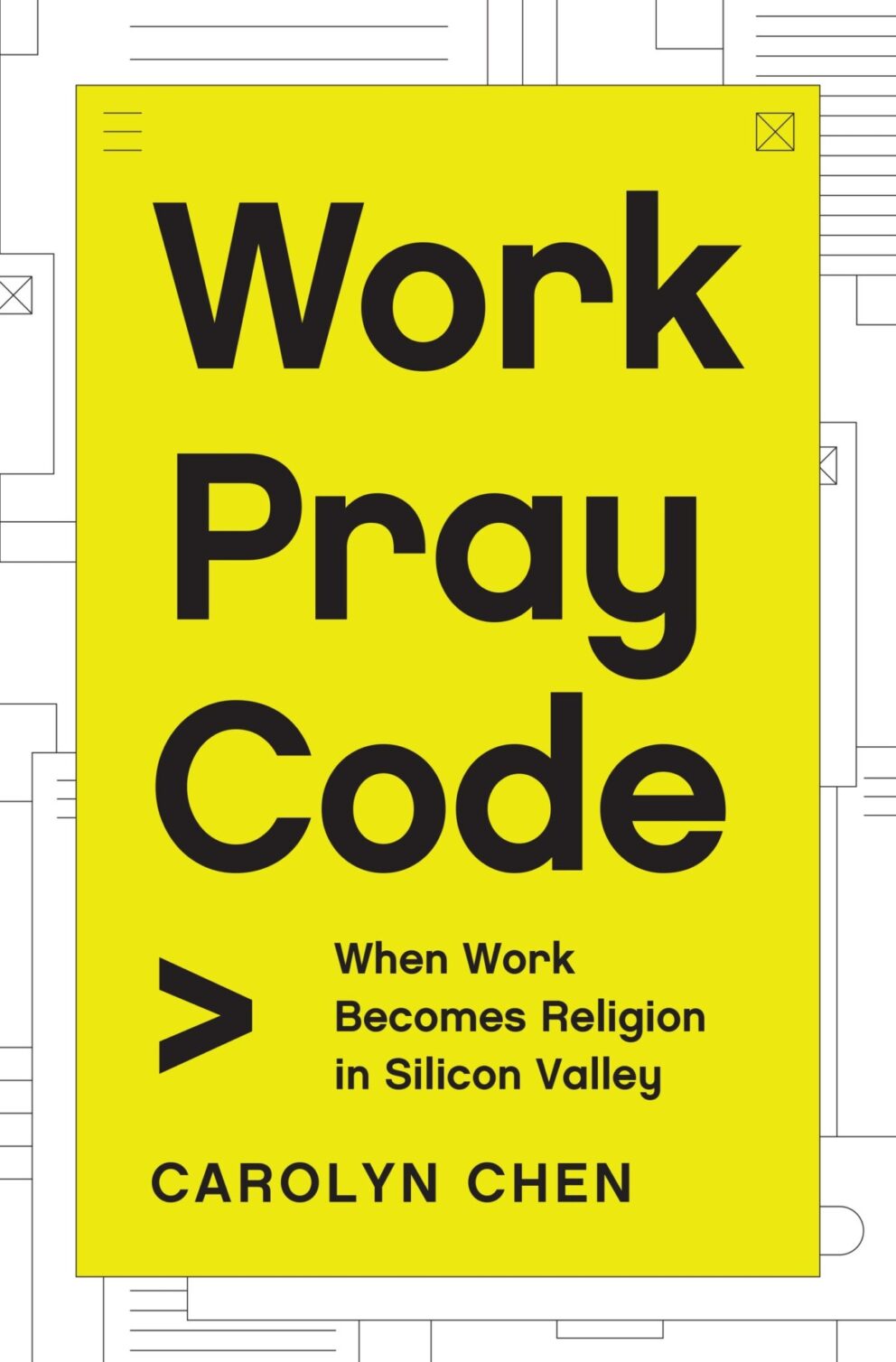 
This event has been rescheduled to Fall 2022. Date TBA.

Please join us for this “Author Meets Critics” panel, as Carolyn Chen, Associate Professor in the UC Berkeley Department of Ethnic Studies, will present her new book, Work Pray Code: When Work Becomes Religion in Silicon Valley. Professor Chen will be joined in conversation by Arlie Hochschild, Professor Emerita in the UC Berkeley Department of Sociology, and Fred Turner, the Harry and Norman Chandler Professor of Communication at Stanford University.

Silicon Valley is known for its lavish perks, intense work culture, and spiritual gurus. Work Pray Code explores how tech companies are bringing religion into the workplace in ways that are replacing traditional places of worship, blurring the line between work and religion and transforming the very nature of spiritual experience in modern life.

Over the past forty years, highly skilled workers have been devoting more time and energy to their jobs than ever before. They are also leaving churches, synagogues, and temples in droves—but they have not abandoned religion. Carolyn Chen spent more than five years in Silicon Valley, conducting a wealth of in-depth interviews and gaining unprecedented access to the best and brightest of the tech world. The result is a penetrating account of how work now satisfies workers’ needs for belonging, identity, purpose, and transcendence that religion once met. Chen argues that tech firms are offering spiritual care such as Buddhist-inspired mindfulness practices to make their employees more productive, but that our religious traditions, communities, and public sphere are paying the price.

We all want our jobs to be meaningful and fulfilling. Work Pray Code reveals what can happen when work becomes religion, and when the workplace becomes the institution that shapes our souls.

Order the book online. Apply the discount code CHE30 for 30% off, through 5/31. Co-sponsored by the Berkeley Center for the Study of Religion (BCSR).

Carolyn Chen is Associate Professor of Ethnic Studies at UC Berkeley. She is the author of Getting Saved in America: Taiwanese Immigration and Religious Experience (Princeton 2008) and co-editor of Sustaining Faith Traditions: Religion, Race and Ethnicity among the Latino and Asian American Second Generation (NYU 2012). Her new book, Work Pray Code: When Work Becomes Religion in Silicon Valley, was published by Princeton University Press. Professor Chen received her doctorate in Sociology from UC Berkeley in 2002. Prior to teaching at Berkeley, she was Associate Professor of Sociology and Asian American Studies at Northwestern University, where she served as Director of the Asian American Studies Program. At UC Berkeley, Professor Chen is Co-Director of the Berkeley Center for the Study of Religion, a member of the Center for Chinese Studies, and the Religious Diversity Cluster at the Othering and Belonging Institute, and an affiliate in the Department of Sociology.

Arlie R. Hochschild‘s research focuses on the rise of the American right, the topic of her book, Strangers in Their Own Land: Anger and Mourning on the American Right (The New Press, September 2016), a finalist for the National Book Award. Based on intensive interviews of Tea Party enthusiasts in Louisiana, conducted over five years and focusing on emotions, she tried to scale an “empathy wall” to learn how to see, think and feel as they do. In The Outsourced Self: Intimate Life in Market Times, she explored the shifting boundary between market and intimate life and methods by which individuals manage that boundary to keep personal life feeling personal. In 2013, she wrote So How’s The Family and Other Essays, a sampler of an applied sociology of emotion. It includes essays on emotional labor—when do we enjoy doing it and when not?—empathy, personal strategies for handling life in a time bind, and the global traffic in care workers. Earlier work was based on field work among older residents of a low-income housing project, (The Unexpected Community), flight attendants and bill collectors who perform “emotional labor” (The Managed Heart), working parents struggling to divide housework and childcare (The Second Shift), corporate employees dealing with a corporate culture of workaholism (The Time Bind), and Filipina nannies who’ve left their children behind to care for those of American families (Global Woman). Her work is available in 16 languages.

Fred Turner is Harry and Norman Chandler Professor of Communication at Stanford University. He is also Professor by courtesy appointment in the Departments of History and Art & Art History. In 2012, he was appointed the Akiko Yamazaki and Jerry Yang University Fellow in Undergraduate Education in honor of his commitment to undergraduate teaching. Turner’s research and writing explore media, technology and American cultural history. He is especially interested in how emerging media have shaped American life since World War II. He is the author of three books: The Democratic Surround: Multimedia and American Liberalism from World War II to the Psychedelic Sixties (Chicago, 2013); From Counterculture to Cyberculture: Stewart Brand, the Whole Earth Network, and the Rise of Digital Utopianism (Chicago, 2006); and Echoes of Combat: The Vietnam War in American Memory (Anchor/Doubleday, 1996; 2nd ed., Minnesota, 2001). His essays have tackled topics ranging from the rise of reality crime television to the role of the Burning Man festival in contemporary new media industries. Turner’s writings have won a range of awards, including the PSP Award for the best book in Communication and Cultural Studies from the Professional and Scholarly Publishing Division of the Association of American Publishers and the Katherine Singer Kovács Essay Award from the Society for Cinema and Media Studies. They have also been widely translated. Turner has been a Beaverbrook Fellow at McGill University, a visiting scholar at Leuphana University, and twice a Fellow at the Center for Advanced Study in the Behavioral Sciences at Stanford. He has consulted on exhibitions at the Whitney Museum of American Art, the New York Historical Society, the Haus der Kulturen der Welt in Berlin, and the Victoria and Albert Museum in London. Before joining the faculty at Stanford, Turner taught Communication at Harvard University’s John F. Kennedy School of Government and the Massachusetts Institute of Technology. He also worked as a freelance journalist for ten years. His writing has appeared in venues ranging from the Boston Sunday Globe Magazine to Nature.