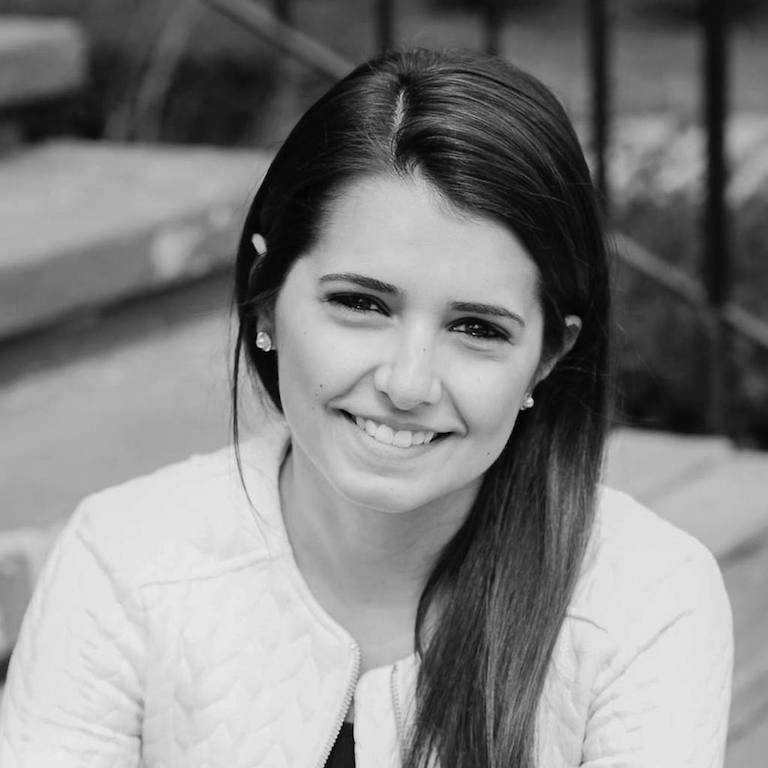 The second in an ongoing series on current and recent Berkeley grads working on religion.

As part of our ongoing series spotlighting UC Berkeley graduate student research, BCSR recently had the opportunity to chat with Candace Lukasik, a PhD candidate in Anthropology studying the Egyptian Coptic Christian diaspora in the United States. Her in-progress dissertation is titled “Transnational Anxieties: Shaping a Minority Community between Egypt and the United States.” Candace won a BCSR grant this past summer to do research among a number of Coptic communities in New Jersey and Washington D.C. We asked her to tell us more about her dissertation and a separate article she wrote about the importance of the Green Card Lottery to Egyptian Christians for the Coptic Canadian History Project. That article, “Land, Migration, and Memory in an Upper Egyptian Village,” depicts the declining social status of Egyptian Copts over the course of the last half-century and the subsequent rise of Coptic immigration to the U.S.

BCSR: Can you tell us about your dissertation project and what you see as the broader significance of your research?

Lukasik: My dissertation, “Transnational Anxieties: Shaping a Minority Community between Egypt and the United States,” examines how migration to the United States has affected the political subjectivities and religious sensibilities of a Christian minority community from the Middle East. In particular, my fieldwork has focused on (1) how Coptic Christian émigré populations in the US have influenced and challenged the Coptic Orthodox Church, as both a global, religious institution for Coptic Orthodox Christianity and a national institution for the Egyptian state, in its vision, domestic political agendas, and theological authority; and (2) how Coptic communities in the US have shaped their identities in a post-ISIS context, and how this has affected relations between Copts and Muslims in Egypt. As a “mobile ethnography” between Egypt and the United States, my dissertation traces Coptic identity across and within multiple sites in order to understand the interlocking relationships of transnational Coptic communities. Broadly, it tracks the circulation of the minority concept around which Copts have been distinguished and identified, historically, by colonial regimes, and politically, by global modes of governance, and it examines how Copts themselves have engaged the minority concept in different ways to define their communities.

Lukasik:  With funding through BCSR, I have been able to finish up research interviews and attend conferences and workshops in Washington D.C., a hub for governmental, NGO, and think-tank work on the status of Middle Eastern Christians and religious freedom, more generally, in the region. These interviews and events are important for grounding my project in larger conversations happening in the U.S. around migration, as well as the geopolitics of terrorism and the position of Middle Eastern Christians in these conversations.

BCSR: How does the piece you wrote about the Egyptian Coptic community and the green card lottery fit into your dissertation?

Lukasik: A large part of this dissertation focuses on migration and the politics of mobility. Specifically, my project focuses on the importance of the Diversity Visa, or Green Card Lottery, for Coptic Christian immigration to the United States. The Green Card Lottery program has become part of the larger debate on immigration in the United States. Egypt has continued to rank as one of the highest recipients of the Green Card Lottery, especially since the 2011 Egyptian revolution, as more and more Egyptians, especially Coptic Christians, have applied. Part of my research has been centered on documenting the importance of the Lottery for Christians throughout Upper Egypt, where there are a high number of applicants. I focused my observations in a village near the town of Nag Hammadi, in the governorate of Qena. Both in this village and in Nag Hammadi, I sat in the computer centers located in local churches that help applicants apply to the Green Card Lottery—where volunteers took their photos and entered in any required information into the online system. While there, I also conducted participant observation, hanging out and speaking with interlocutors about local histories of migration, personal experiences with their Muslim neighbors, and on what migration means to them today. I wrote about this experience and my conclusions in an article for the Coptic Canadian History Project, entitled “Land, Migration, and Memory in an Upper Egyptian Village,” which highlights how migration has changed the landscape of Upper Egypt, an area usually associated in international news with sectarian violence. 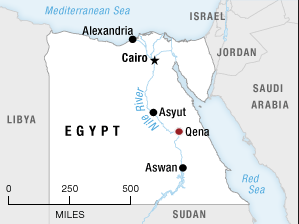 Lukasik: I’ve been studying and researching in Egypt since 2007. Following the 2011 revolution, I conducted fieldwork on Coptic Christian political movements for my MA thesis at Columbia University, which was later published. At UC Berkeley, I planned on continuing my work solely in Egypt, under the advisement of the late Professor Saba Mahmood and Professor Charles Hirschkind. Since the coup of 2013, the Egyptian government has cracked down on researchers and journalists in the country, and Egyptian civil society has been decimated. Because of this, I made a decision to adapt my project to a more transnational focus on Coptic Christian migration, especially to the United States, which has increased dramatically since 2011 and especially since the coup of 2013. Over the past five years, Egypt’s Christian minority has experienced a spate of bombings and a general level of insecurity. While my research focuses on Copts, these events have not only affected them, but Egyptian society more broadly. These incidents are read in the US political context in different ways. Under Trump, anti-Muslim rhetoric domestically has been aided by incidents against minority communities in Egypt and elsewhere in the Middle East. My work partially traces the arguments made for connecting the two for political expediency in the US context. These dynamics have also affected the ways in which my interlocutors in Egypt see their futures there as well as daily interactions between themselves and their Muslim neighbors.

While most of my previous research was based in Cairo and Alexandria, I moved to Upper Egypt for fieldwork since the majority of Coptic migration to the U.S. over the past decade has originated from small villages throughout the south. In Egypt today, one would be hard-pressed to find a Christian who does not have a relative in the U.S., given the push for many Christians, and Egyptians generally, to leave the country for political, religious, and/or economic reasons. 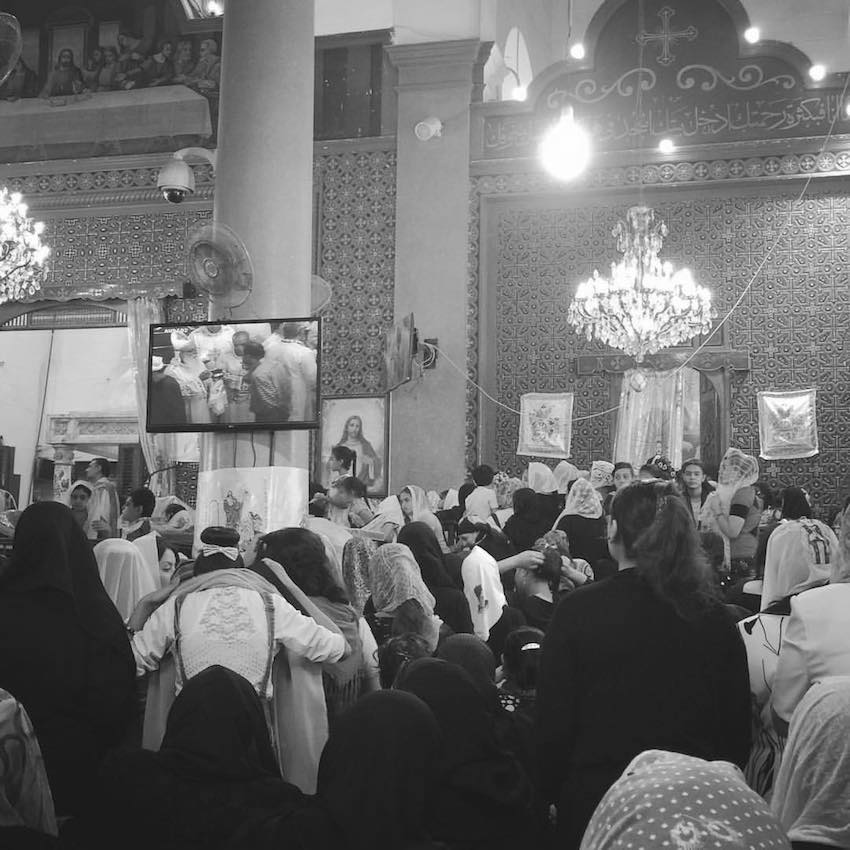 Sunday liturgy at the Mar Girgis Church in Bahjura

BCSR: What are your future research plans?

Lukasik: For my remaining time at Berkeley, I plan on writing up my dissertation, and applying to postdoctoral fellowships and tenure track positions starting in the Fall of 2019. As for future research plans, I plan on continuing to work in the Coptic community, expanding upon the questions raised in the dissertation, and possibly focusing more specifically on theological education and how the ecumenical movement of the 20th century has impacted [Coptic] Church-lay relations globally today.

BCSR: Thank you for your time, and best of luck!