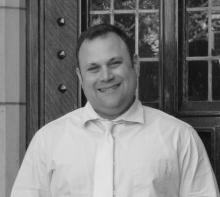 Russ Leo will present his research on the intersections between poetic and philosophical experiments in Anglo-Dutch contexts across the 1650s, 60s, and 70s, particularly the ways one might place Milton and Spinoza in conversation. This involves attention to Spinoza’s contributions to literary culture in Amsterdam and the Netherlands at large, as well as his debts to poets and poetics. For instance, while historians of philosophy often overlook Spinoza’s debts to theater, and misunderstand attempts by the Dutch dramatic society Nil Volentibus Arduum to write philosophical tragedy in the spirit of Spinozism, attention to a tradition of philosophical tragedy (in Latin and Dutch, across the 17th century) makes these developments and their larger import clear. Such work enables us to see different continuities and discontinuities across the period, challenging assumptions about Enlightenment and modernity.

Russ Leo is an Assistant Professor of English at Princeton University. He has a PhD from Duke University, with certificates in Feminist Studies and Interdisciplinary Medieval and Renaissance Studies. He is completing his first book, Tragedy as Philosophy in the Reformation World: The Time of Cruel Miracles. In chapters on John Foxe, Shakespeare and Milton, as well as lesser known but central figures like David Pareus, John Rainolds, and Daniel Heinsius, he argues that keen attention to early modern drama and poetics is absolutely crucial to our understanding of the long Reformation, and that tragedy in particular emerges as a privileged site for theological and philosophical inquiry.

The event will be held at D37 Hearst Field Annex.

Sponsored by: The Department of English; the Townsend Center for the Humanities; The Program in Critical Theory; the Medieval Philosophy Working Group, and; the Berkeley Center for the Study of Religion.